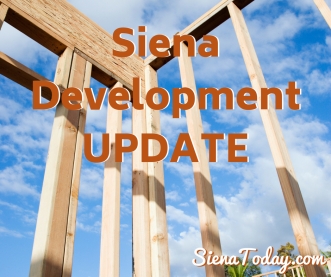 WHEN WILL THE LIGHTS BE ACTIVE ON CR 110? Multi-family coming? More patio homes? Your questions answered and more in this edition of Siena Development Update!

The work has been postponed a number of times after originally scheduled to be completed in May. The work was first held up by a delay in receiving the poles and arms for the intersection. As you can see, those have been installed and the lights attached. The most recent update I have from TXDOT is that they do not have an estimated date yet when the signal will be activated but it shouldn’t be too much longer. The contractor is coordinating with ONCOR on the electrical service – they had an issue with the transformer and ONCOR is having to replace it.

You have probably seen the development work and street installation going on at the northeast corner of Mozart and CR 110. This is a second section of patio homes and will have 73 lots. The developer was planning on building patio homes in other areas around Siena that have been designated as “multi-family” but those proposals have been rejected by the WILCO engineer. The patio home sections require private streets that were originally approved by Round Rock but have now been rejected by the county. Without private streets, the only other option is apartments or town homes. The Siena development is approved for 1500 multi-family units as part of the original plans but is currently projections are now for much less.

Williamson County is now requiring the developer to install a pond in the parcel north of Toscana Trace off CR 110 in the North section of Siena. I will provide more information about this development as it becomes available.

I’m sure you have seen the site prep going on across US 79 from Siena on the south side as you are pulling off CR 110 onto US 79 – this space was a horse farm. Park 79 is a business park that includes the commercial buildings already developed further to the East. It will include industrial space, office distribution and showrooms.

I hope this information is helpful to Siena residents. If you have an specific questions I can answer about Siena and the developments around our community or a story that should be on Siena Today, contact me and let me know!

Curious what Your Home is Worth?
Get Three Automated Estimates – Instantly

By your Siena Round Rock Neighborhood REALTOR, Kyle Pfaffe

Read My Bio | Search for Homes | My Youtube Channel 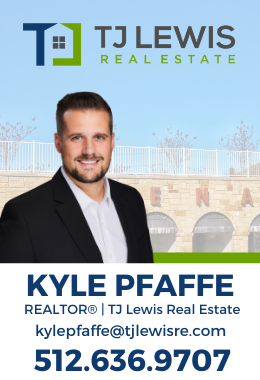